A new site has been launched, to accompany a BBC Proms event inspired by the work of innovative composer John Cage.

The John Cage Music Walk is a guided event around ten locations in London, where the audience can listen to specially commissioned compositions. The site, and digital content allows people to visit the ten sites, in any order they wish, and listen to the compositions via a mobile device. 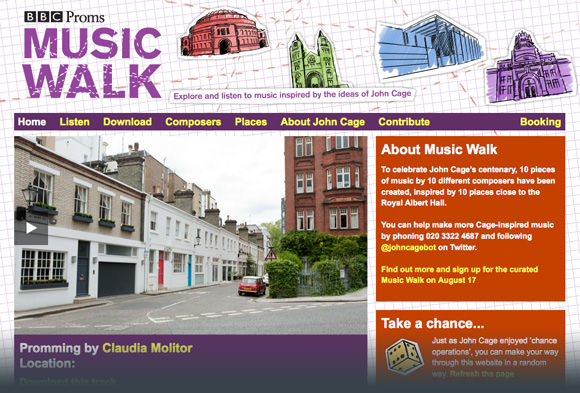 Dean Vipond was hired by the marvellous folk at Caper, to design a logo and website, to promote the event, and provide access to the ten compositions. The logo was designed in a method inspired by John Cage's approach to making music. Cage would often let outside elements determine the outcome of his work, such as imperfections in note paper guiding where he wrote musical notes. To that end, the logo used simple, dotted lines, linking the ten locations on a map, to intersect a very simple typographic rendering. The colour was chosen simply because it was used on Transport for London's map for the event.

The site is based around BBC's own online style guide, and is also optimised for mobile use, allowing people to access the tracks while on the walk.

You can also follow the John Cage Music Bot on Twitter, to get some Cage-esque ideas for making your own music.