Bradford saw in influx of game-related creativity in November, as the gaming wing of the Bradford Animation Festival took place. The two-day event saw a genuinely impressive range of international talent give talks and demos, with big-hitters like Sony, Bethesda and Valve being represented. With this being part of the animation festival, the focus was much more on the art and creativity that goes into game creation, which suited me just fine.

First up was Stewart Gilray, Development Director at Oddworld Inhabitants – owner of one of the original Playstation era's most popular franchises, sparked by the marvellous Abe's Oddyssee. Coincidentally, Gilray is also CEO of the Otley-based company Just Add Water, who are currently reviving the franchise, and releasing Oddworld games on new platforms. The main thing I took away from this talk was the importance of appropriateness. Gilray said that it seemed almost a no-brainer to port the original Abe games to iOS platforms, but touch-screen controls just did not suit the often tricky gameplay, so they decided to abandon it. It was also heartening to hear that they care enough about the good will towards the Oddworld brand, not to tie it to shovelware (for example, creating an Abe-skinned Angry Birds clone would devalue the brand, despite undoubtedly selling well).

From Paper to iPad

Later, Nyamyam showed a demo of their staggeringly beautiful iPad game, Tengami (due in 2013). Inspired by physical pop-up books, and using interesting gameplay tricks, it looks to be a measured, thoughtful game. It actually reminded me a lot of Superbrothers: Swords and Sworcery, in the feel of the gameplay. As an indie developer, Nyamyam are keen to put much of their own personality into the game, which is where a project like that can differ from big-budget games. I was impressed at how the team learned how to make pop-up books in real life, before they could even begin to understand how they could translate the physicality into a 3D game engine. They also learned that, for this game, interacting with the paper world, rather than the character itself, was more satisfying, and also suited touch-screen controls. Their main aim with the game is to achieve a sense of wonder, and I hope they manage this. Can't wait to try it.

Hogmented Reality
From very small, to very big, we next saw a talk from Sony London, who were showing the creative work that went into the new Playstation Move game Wonderbook: Book of Spells. It's a spin-off from the Harry Potter world, with J.K. Rowling's name attached, so obviously it should shift plenty of units. Requiring a carrier bag full of peripherals (Move controller, Playstation Eye camera, Wonderbook), it aims to use all these to (hopefully) transport players to Hogwarts and get them practising spells. I'm loathe to use the term 'augmented reality', as most attempts at it are plain lame (as this talk by Kevin Slavin discusses), but it was hard not to get carried away in the talk. Copies of the latest iteration of the Wonderbook were passed round, and it felt sturdy and well-made. There was much talk of the research that went into the art style for the game, inspired by the likes of Arthur Rackham, William Blake, as well as old biological illustrations. Due to the size of the working team, a strict style guide was developed early on, and stuck to, to ensure consistency. Santa was kind enough to bring a copy to the Vipond household this Christmas, and it works very nicely indeed.

Abstraction and Meaning
The best talk of Day 1 was saved until the end of the day, with Lucas Hardi, from heavyweight developer Bethesda (makers of the Fallout and Oblivion game series). He spoke about how game art has developed over the years, in that we now use the term 'art style', as opposed to 'graphics', demonstrating a deeper integration of visual design and creativity in the process of game development. I was particularly pleased to see Hardi citing the brilliant book Understanding Comics by Scott McCloud (which is highly recommended whatever your line of work). From it, he spoke of the three-pronged axis of abstraction, reality and meaning – essentially, the more abstract an illustration, the more one can suspend disbelief and become immersed. Anyone can point at two dots and a line and say, 'that's a face', but the nearer one gets to drawing a realistic face, any flaw becomes something which chips away at one's belief in it. Ultimately, you do not need 'realistic' graphics, if your style is consistently abstract and meaningful. 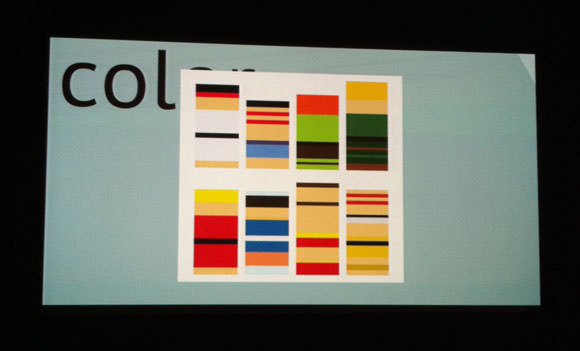 He went on to discuss other things, such as how using colour can help overcome technical limitations, and how giving character designs distinct silhouettes can mean they're recognisable from long distances, when they're very small. All very interesting stuff, and the guy clearly has vast knowledge on the subject. A really fun, informative and inspiring talk.

What surprised me, though, was how banal the Q&A sections at the end of most of the sessions were. The audience was very student-heavy, probably a good 80%. When someone who has worked on some of the biggest games of recent years has flown across the Atlantic, to speak in Bradford, surely young game design students would have a bazillion questions to ask? No, it would seem that asking how to apply for a job at Bethesda, and what are good blogs for 'inspiration' are about as probing as the audience could get. Indeed, a lecturer piped up, to ask Hardi to encourage his students to research the whole history of art for inspiration, rather than just 'other games'. I doubt this is uncommon though. I remember as a graphic design student in the mid-'90s, when Raygun magazine was the big thing, half the course wanted to be David Carson, and just mess around making bad typography. I'm sure many of them now have very good careers in design, and it's a phase students have to go through. It's just that at that moment in the Pictureville Cinema, I felt a little embarrassed by the responses.

Despite this, Day 1 was great. I'll report on Day 2 soon.