It was a full house in the lecture theatre at Leeds College of Art & Design last night, for June's Creative Networks get-together. There was a nice pre-talk vibe due to it coinciding with the end-of-year shows for the various creative courses at the college. A jazz band was playing, and I didn't hear any complaints about the prevalence of free food and wine! Unfortunately time restraints meant I only got to the venue 20 minutes before the main event, and only the Visual Communications exhibit was still open afterwards. However, that show was very inspiring, and I picked up a good few business cards to check out later.

Creative Networks has a reputation for bagging noteworthy speakers, with this evening's being no less distinguished. Creative Review editor Patrick Burgoyne was here to give a talk entitled 'Labels and where to stick them'.

Burgoyne opened with a brief history of the visual style of Creative Review's covers. We saw a number of covers spanning the magazine's 29 year life span, from its distinctly '80s-looking early designs, through to the present day. It's easy to laugh at the earlier covers, but obviously it's the job of a title like Creative Review to reflect the visual styles that help shape culture at that time. It was interesting that Burgoyne admitted they have always struggled with doing something interesting with the magazine's masthead, seeing as it's a relatively unwieldy title. The current, pared-down 'CR' marque is a good solution, especially as it's easily adaptable to multiple platforms.

It was also quite alarming to learn that the whole magazine is seemngly put together by about five people, with one person designing and laying out the entire publication! Very impressive. 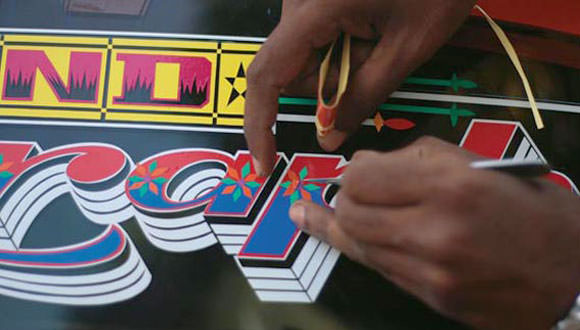 We were then shown some examples of the magazine's recent trend of using the cover to summarise its main articles in a single design. Brazilian woodblock printers, Spanish sign makers and Indian vinyl sticker producers have all been employed in recent issues, and it's heartening to see this kind of dedication to physical craft, at a time when so much focus is placed on digital media. To underline this, we then saw a short film on the aforementioned Indian graphic style known as 'radium', used to decorate Mumbai taxis. It was a fascinating little film (once the technical issues had been sorted out - mental note: NEVER embed a video into Powerpoint!), made more poignant with the knowledge that the local government are trying to ban this striking visual art form, supposedly for reasons of taste!

One person: many hats

Moving on from the 'real world', Burgoyne then spoke about Creative Review's online presence. The creative industries are in a state of flux right now, and Patrick stated that this was both exciting and terrifying, as no one really knows how things will pan out. This is where the title of the talk began to make more sense, as where there were once very distinct boundaries within the creative industries (design, advertising, production, print, etc.), these can now all be undertaken by an individual, due to technology. As a prime example, he cited Sheffield agency Universal Everything, which is essentially one guy and an assistant working from home, but with an international network of suppliers. Being so small hasn't stopped them working on impressive projects for the likes of Nokia. 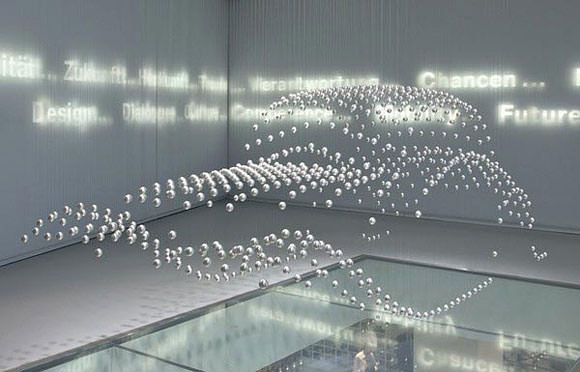 Next, we saw a video of the quite staggering kinetic sculpture at the BMW museum, made from 714 individually programmable suspended metal spheres, used to form patterns and shapes. Is it art? Advertising? Engineering? Hard to say. Along with a couple of other projects, Burgoyne mused on whether we need labels anymore, in such a fluid environment. To my mind, this isn't a recent thing. You only need to look at the work of people like Saul Bass or Paul Rand - work with a distinct commercial focus, but created with a beauty and heart that elicits emotional responses more akin to art than marketing.

The state of advertising

Although the design scene is thriving (creatively, if not necessarily commercially) at the moment, Patrick suggested that advertising is having real problems. Gone are the days when agencies could just throw money at a campaign, and buy their way into people's awareness. Few agencies are making true progress with things like social media. However, Burger King's "Whopper Sacrifice" was a deft piece of marketing, which proved so successful Facebook pulled it down.

Patrick closed his talk by urging the exhibiting soon-to-be graduates in the audiences to be excited about entering the creative industries, even in a recession. He reminded us that 50-year-old creative directors can often be out of touch, and are turning to the juniors for direction on how to run things. This was good to hear, especially at a time when jobs in design are at a particular low.

There was a short Q&A, which focussed a lot on the future of print media in the face of the digital onslaught. Patrick felt that there will always be a place for tactile product, even if this ends up being marginalised. Personally, I never plan on keeping a laptop in the bathroom for a read!

It was an interesting and thought-provoking talk. The numerous technical glitches did halt momentum a little, but I was certainly glad to have attended. The creative industries are definitely more fluid now, and it's hard to pigeonhole exactly what people do. However, we all still need to be able to sum up what we do, so I think there will always be need for labels.