Part two of my report from dConstruct's one-day conference in Brighton. Following a lovely lunch in the sunshine in Pavilion Gardens, we re-entered the theatre for part two of dConstruct.

First up was blogger John Gruber, who received whoops and cheers as he took the stage (I'd not heard of the guy before). His talk was on the notion of auteurship; that the best projects are those with an individual ultimately calling the shots. The typical adulation of Steve Jobs followed (can we get through one conference without people pointing to Apple as an example of design directly influencing business success? WE GET IT!), but most of his talk was centred on film makers, where the likes of Hitchcock, Kubrick, et al controlled the entire creative direction.

This is all well and good, but I'm unsure of how far this can really translate to design, where customer engagement is often essential. Just because Apple run very little customer engagement programmes in the development of their products and services, does not mean it's not of worth. Would anyone want to drive a car which hadn't been tested with customers first? What about a banking website, or a health service? Sure, leaps of faith and intuition on the part of designers are vital to the process, but to dismiss the needs of clients or end users is arrogant. Still, it's a good way to get a designer-heavy crowd on-side.

The next talk (from Last.FM's creative director Hannah Donovan) began with a lovely improvisational music performance, which served as a prelude to this talk on how we can learn from musicians when designers improvise. Taking in classical music, jazz and early hip-hop, she demonstrated how improvisation still needs rules, roles and desired outcomes to be successful, and not be an unfocussed mess. It is also important to not let your tools inhibit your thinking, which is why a pen and paper will always be better than Photoshop for brainstorming and rapid prototyping.

This was a really interesting talk, not least because it wasn't directly about design. While the preceding film-based talk left me cold, I still see it as important that talks like this are on the programme. Designers need to be inspired by much more than just other designers, lest their work becomes a homogenous dirge, adding to the clutter Marty Neumeier mentioned.

The value of ruins

Without doubt the most startling talk came from James Bridle, a historian and publisher, on the importance of preserving our past. Throughout history, humankind has wilfully and repeatedly erased its archives and histories. Giving many heartbreaking accounts from throughout history, stretching from The Alexandrian War (over 2000 years ago) through to World War 2, and more recently Sarajevo and Baghdad, we learn of how so much of our recorded knowledge and information has been destroyed.

It's just as pertinent now, as despite the efforts of things like the Wayback Machine, websites as cultural and historical artifacts are constantly disappearing as servers are switched off, or domains expire. I wrote a piece about this myself, and it was heartening to see that others have been thinking about it too. James points to Wikipedia as a wonderful example of how we are recording information in new ways. Each article's history section shows every amendment to the article, allowing us to see not only the latest version of events, but how we as people piece together our history. As an example he pointed to the article on the Iraq War, the history of which he had printed and bound – in twelve volumes! A marvellous, tangible example of a new way of preserving our past.

James' delivery was passionate, funny and assured. As Matt Edgar mentioned on his blog, he deserves his own BBC series. 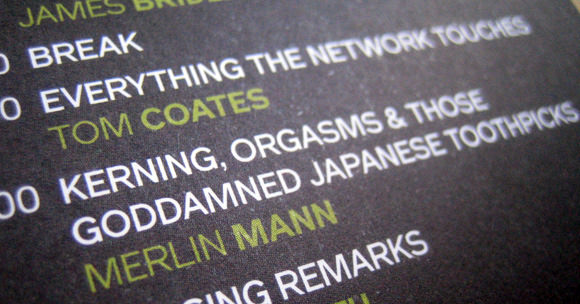 Tom Coates provided a stellar talk, on the subject of the power of networks when they encapsulate much more than computers. Like James before him, he looked back in time, to Darius The Great's Persian Royal road network which, while allowing for the sharing of information, also influenced what we make and how we make it – things no longer had to be made with local materials. Similarly, the internet is also changing things, such as how sets of data available to us now inspire people to develop useful new services. He stated that all the really successful services have also allowed their data to be accessed and used by others, such as Facebook, Twitter and Flickr, triggering a swathe of great new ideas. Just look at how many sites and services use Google Maps!

He then went on to examine how adding connectivity to things that don't really need it will inspire people to become more creative, pointing to the networked bathroom scales which upload your weight to the internet, allowing you to monitor fluctuations, and keep to your diet. Also interesting was the idea of objects as a service, whereby we would no longer buy a washing machine, but have one installed for free, but be charged per wash.

Pushing this notion past the household, he looked at the idea of the networked city, where data and connectivity are already being piloted to provide useful services, such as London's cycle hire programme, or San Francisco's parking meter initiative. Exciting and insightful stuff, but as always, problems will persist such as issues surrounding privacy. Also, inequality will continue to be problematic, not least because such services would still require people to have mobiles or computers to exploit them.

Despite this, Tom pointed to people's willingness to get involved and spend their time contributing to a whole (specifically the Open Street Map project) as a positive indication of how connectivity will help facilitate people to get more out of the things that surround them, and act as a force for good.

Unfortunately I had to leave before the final talk for the long trip back north, but overall, dConstruct 2010 was an excellent event, leaving me with much to think about. The most engaging and useful talks came from those subjects less specifically concerned with design, but the broader contexts in which design plays a part. This is ironic, as I left with the nagging feeling that many of the attendees will have left thinking that things would be much better if they were allowed to control everything.

Phrases such as 'design thinking' seem to be gaining traction right now, and while I've worked on countless projects where designers have been involved far too late in the process, they are still just one (vital) element in the success of a project. Encouraging more people to be involved in the design process allows the designer to gain a deeper understanding of a project's desired outcomes. Shutting everyone out does not necessarily mean you will get a better outcome.

I highly recommend that you download the audio podcasts of each talk.