Lots of digital thought is converging on Leeds next week, and I'll be doing a talk as part of it. The Leeds Digital Conference features a mix of talks and sessions covering design, development, marketing, SEO and blogging. It's part of the Leeds Digital Festival, which is going on right now, and has a broad and exciting programme of events. 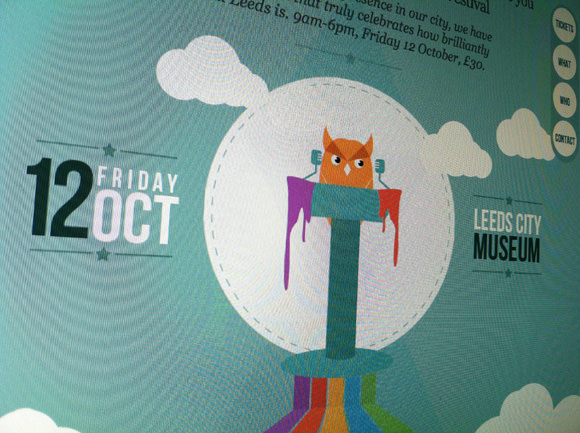 Ahead of my talk, the LDF team have asked me a few questions. Here's what I had to say:

Who are you e.g what's your job and how many years have you been in Leeds?

I'm a freelance interaction and visual designer, tackling thorny and interesting interaction problems, across multiple platforms – web, mobile devices, social media, etc. I'm lucky to work with lots of interesting people, on big brand stuff, and exciting start-ups. I began my design career in Leeds, when I moved here in 1998.

Hmm, well that's a difficult one for me to answer, as I often work in distributed teams, across the country, and sometimes across the world. Even when I was working for many years for a legendary Leeds digital company – Freeserve – the design team was split between Leeds and London offices, and there was no north/south divide. We were just united in the aim of doing great work.

The internet means that you don't have to be limited by location – if there's trust between team members, and the client, then it doesn't matter if you're based in Leeds, or Lisbon. Having said that, Leeds does have a strong scene, with a tonne of things going on throughout the year. It's also boasted co-working spaces for many years, such as Old Broadcasting House, which is great for sharing skills.

Why should a potential client pick an agency from Leeds?

Because they're good, not because of where they're based. There are some corking agencies in Leeds – just look at the stuff an agency like Numiko put out – innovative, fun things like the Foxes Live site they did for Channel 4. Compare that with the really effective, results-driven work folk like Kilo 75 deliver, and you can see there's huge variety here. But a choice of supplier should ultimately be based on a good fit, not location.

Also, it's not always about agencies. The freelance scene is really thriving, with people assembling teams on a project-by-project basis, which is really exciting. That's not to mention some of the big in-house design teams we have here, at places like Orange (now EE), and O2.

What will you be speaking about at this year’s Leeds Digital Conference?

I'm in the Design session (obviously), but I won't be talking specifically about technique. Typography, layout, that kind of stuff. You can read a book or a blog post for that kind of thing, and I'd much rather start a discussion. I'll be talking about digital memory, and the amount of services which we use to track our activity – Last.fm, Foursquare, RunKeeper, etc. I'll be examining the amount of value we get from these services, compared to the amount of data we pour into them. How can we design these services to deliver something of real worth? I've not necessarily got a definitive answer, but it's something I'd like to explore and discuss.

Predictions for the Digital Industry in 2013? What should be top of the agenda at the conference?

I don't know if it'll happen in 2013, but I do wonder if there'll be a tipping point soon for online privacy. With the colossal level of (over)sharing we all do online, I think there may be a high-profile event that might shock people into being a lot more guarded about their online life. What that may be, and when it might happen, I don't know!