I've finally written up notes from my talk at the Leeds Digital Conference 2012.

I've been a Last.fm user since 2006, but 2012 was finally the year I stopped using the service. Not due to some great epiphany about life-logging, more an annoying technical issue where Last.fm's scrobbler app kept crashing iTunes whenever I played an audio CD on my iMac. It took several months for me to finally cut the cord, during which time I would only listen to digital music, so I could still scrobble, whilst working, despite the fact the glitch in the service now meant it was influencing what I listened to. 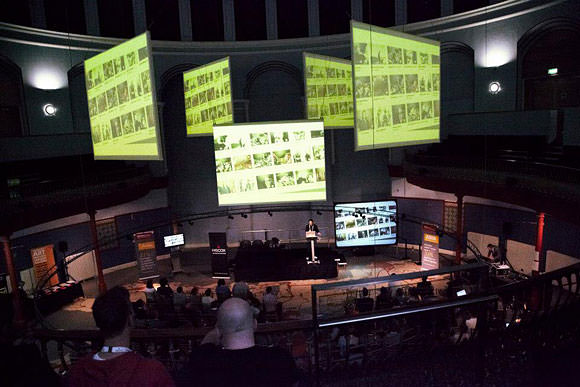 After switching it off for the last time, I started musing on why I was so hooked on it in the first place. Why was it difficult just to walk away? Like any habit, it's hard to give up. But what benefit was I specifically getting from this habit?

When my friends and I first heard of Last.fm, it all seemed very cool and clever. Wow, you can track every song you listen to, and see what you're friends are listening to as well! Broadcasting your tastes was fun. You could look at my 'top artists' and have a pretty good idea of what music I liked, but it was incomplete. I could only scrobble music that I listened to at my computer. Sure, I could sync my iPod with it too, but thanks to iTunes being so horrible, I never risked that, for fear of wiping it. I couldn't scrobble from the little CD player in my kitchen, and I couldn't scrobble from browser-based music services, such as Soundcloud or Bandcamp, which I use a lot.

Despite the incompleteness of what I was scrobbling, and the inconvenience which scrobbling was causing me, I stuck with it for months. Why?

It wasn't the social broadcasting angle. I didn't use Last.fm as a proper social network, and I knew all of my contacts on the service in real life anyway, so these people would already know what my tastes were. I came to the realisation that no one actually cares about exactly how many times I've listened to a specific song, apart from myself.

The more I thought about it, the more I realised my reluctance to walk away was due to a sense of waste. I'd paying into this particular digital pension for over six years, and it hadn't yet matured. I don't know what it was going to mature into exactly, but the urge to keep going was considerable. I didn't need to use the service for recommendations – Amazon has that locked down to an unnerving degree of accuracy. As my friend Tom Morgan said in a discussion on this subject, "I'd've thought, after all this time, we'd've got something better than just recommendations". Of all the data Last.fm must have on me – surely they could deliver some real insights back to me?

It struck me that by using Last.fm and Foursquare and Raptr and GetGlue and so on, we've become digital hoarders, without really understanding why we do it, or really benefit from it. Training apps, such as Nike+, Runkeeper or Weight Watchers, are obviously exempt from this as they support an actual programme of self-evaluation. For everything else, we seem to be tracking things because we can, and not because we should. We amass lots of data, but very little meaning.

The benefits of our habits

Habits start because of a high benefit/activity ratio, and they tend to become bad habits over time, as people get stuck doing them, whilst the benefit has worn off. With smoking, for example, the initial benefit is looking cool, which balances out the expense and, y'know, the killing-you-slowly part. 20 years in, and the 'looking cool' part has worn off, and been replaced by lots of coughing.

With Last.fm, the initial benefit was the fun of looking at your friends' listening habits, and reflecting on your own. Several years on, the initial benefits have worn off, and I was stuck doggedly scrobbling tracks whilst not being able to listen to audio CDs. It was time to walk away.

Contrary to all this, one habit that I've found has maintained, and even heightened the habit/benefit ratio, has been Instagram. Like most people, I was lured in by the novelty of the filters, and how I could instantly make the most mundane of shots look like a Boards of Canada 12-inch, but what I grew to love was the social aspect of the service. Broadcasting occasional views of what I was doing, whilst seeing the world through the eyes of the contacts in my feed, has become a real delight, and free of the ennui of every other social network I've used. And contrary to a list of every song I've ever listened to, or every film I've ever watched, I'm left with a rich, visual legacy of moments in my life. It's a joy to use day-to-day, as well as when reflecting on past photos.

Obviously, photos are more compelling than a list of things, but perhaps that's the point. Taking photos is initiated by a person, not automated when you sign up for a service. For the most part, one takes a photo when there is an event worth recording. What is being recorded is incomplete, but rich.

When discussing another subject, my friend Imran Ali pointed out that forgetting is important. There's a reason why our brains do not remember in detail every time we have brushed our teeth, even though they are probably capable of doing so. We would go mad with the clutter in our minds! Imagine how stultifyingly dull a service would be, that recorded your dental hygiene regime, and posted it to Twitter! (Depressingly, this is already a reality).

So maybe it's the incomplete things, and the vagaries of memory, that our web services should aim to nurture and reflect, rather than simply creating cold, hard data, that does nothing but hold a mirror up to us? I get much more understanding about someone's entire childhood from a single Dear Photograph post, than if I were to see an itemised list of all their childhood holidays, activities, and cartoons they watched on TV.

If we wish to create services which offer sustained value to people, then surely something smarter must be done with their data. Services should tell people something new about themselves. So how could we begin to do this?

Look at the patterns. What do they tell us? Where and when are people checking into regularly? What does this tell us? Does a person listen to certain types of music at certain times of day? How does their summer listening compare to their winter listening?

Look at the gaps. Why has someone stopped going to a certain coffee shop? Have they moved jobs? Did the shop close? Did they fall out with an employee? It's impossible to define, but reminding people, say, of when they last went somewhere they haven't been to for a long time, might trigger an interesting reaction, in the same way, say, Photojojo sends you photos you took a year ago. Incomplete, but evocative.

Look at the overlaps. How do people's listening habits change between when they're at home, at work, or on holiday? What can we reveal to people about the TV shows they've been watching, in relation to their Twitter usage? Are there any unique tracks a person has only listened to when they've been out of town? There are lots of interesting snippets of information that could be used to piece together a story.

Ultimately, the memory of something is more valuable to us as human beings, than a formal document. We need to make services that are good at making memories, and make us think and reflect, than just regurgitate reams of data, that's of use to no one but marketers.

Thanks to Leeds Digital Festival for the photo at the top. Look at lots more on their Facebook page.