I went along to the third incarnation of The Story, a conference based around storytelling in its many forms, in the fantastic Conway Hall in London.

There was a pleasingly eclectic roster of speakers, all lovingly emblazoned on the solid chocolate programme each delegate received, so the audience had already been won over! 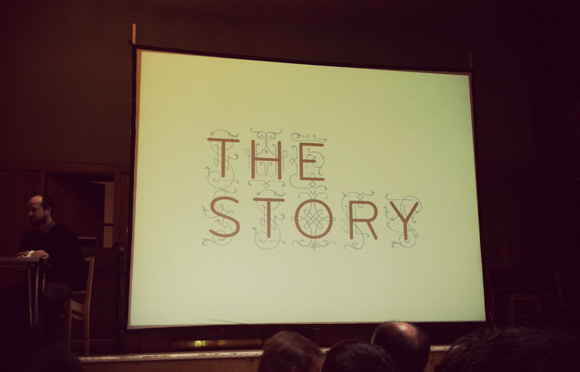 Things kicked off well with Matt Sheret (Last.fm) and record producer Simon Thornton, of Fatboy Slim fame, discussing the lost art of album sequencing. Last.fm's data suggests our listening habits are changing, from the conventional album, to playlists, mixes or individual tracks. This may be true for younger listeners, but a straw poll of the audience (who roughly aged from late 20s upwards) indicates the album is still a valid art form. Nevertheless, the sequencing of tracks to create an overall listening experience with its own ebb and flow is not a purely artistic endeavour, with commercial pressures bearing heavily on the final outcome ('never put a hit single as the final track' is a watchword of record production, apparently).

Jeremy Deller proved a highly engaging and completely different speaker, talking about the miners' strike in the 1980s, and how this is a story that wasn't well told at the time, and remains something lacking a really good document. Jeremy aimed to redress this by conducting a re-enactment of a particular clash, using re-enactment society members and 'veterans' from the time. This gave miners, and the community whom the strikes affected, the opportunity to tell their side of the story, which may not have been faithfully covered at the time. Jeremy also asserted that it's important not to let certain memories fade; to jog the memory or poke the wound, lest the real events and stories of the time be forgotten.

Liz Henry delivered one of the many standout moments, in that she actually told a story in which she was heavily involved. She delivered a fascinating account of the highly publicised Gay Girl In Damascus blog, in which a supposed Syrian lesbian blogger was documenting her experiences, until she was detained by Syrian special forces. What unfolded was a complex web of real and fake online personas, accusations, and detective work on the part of Liz and others online. Liz scotches the notion that fake blogging helps raise awareness of the issues and experiences facing marginalised people, as the stories are usually much more exciting and palatable than the real ones. It's the prservation of the uncomfortable stories that is difficult. 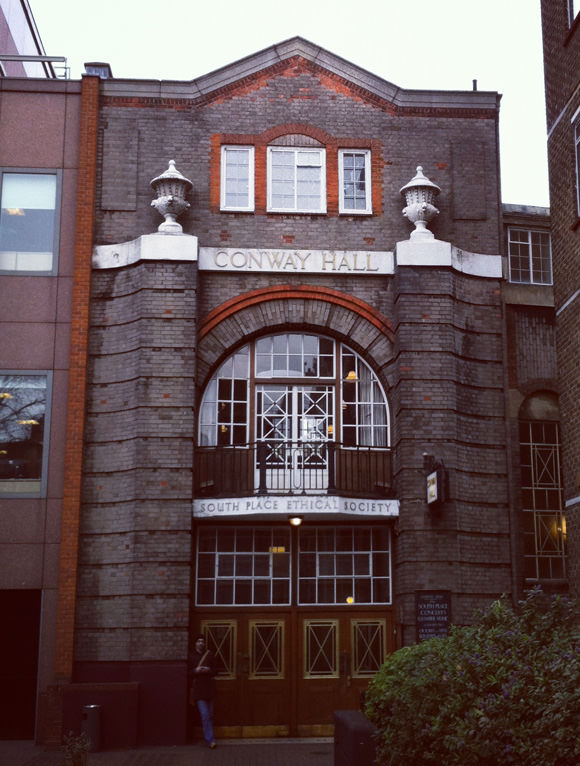 Anthony Owen, a magician (and responsible for many famous illusions, such as The Real Hustle, and much of Derren Brown's work) delivered the notion that many magic tricks play on our desires – immortality, psychic powers, levitation, and so on. The key to a good trick though, is to make the story as simple as possible, presumably to allow people to impart their own imaginations on the illusion. I was reminded of Tom Morgan's excellent Bettakultcha talk about magic and conspiracy theories, which is definitely worth five minutes of your time.

Musician and sound artist Matthew Herbert gave a thought-provoking talk on how, because sound recording technology has only been around for just over a hundred years, we know very little of what our history sounded like. Archeology might show us what history looked and felt like, but we have very little idea of what, say, ancient Egypt might have sounded like. Also, sound can be very subjective. Whereas a painting will look the same to any viewer, the sound of me eating an apple is very different to the sound of you eating an apple.

A Story of Political Failure

My most anticipated talk of the day was Labour MP Tom Watson, a key figure in the News International phone hacking scandal, talking about his experiences. Unlike much of today, this is a story that is continuing to unfold. Indeed, Tom began by informing the audience that Rupert Murdoch had just announced his plans to launch The Sun on Sunday (to which I can't help but think of Alan Partridge shouting, 'They've re-badged it, you fool!', with this basically being a replacement for News of the World. As Emily Bell conducted the interview, you got the impression that no one at the time knew just how big the story was, and that its success was very much influenced by social media, as the only papers covering it were The Guardian and Independent. That Press Association journalists were too scared to report the story (as the PA is part-owned by News International) is just one example of the stranglehold NI has over the stories we consume. The crowd was mostly completely silent throughout this session, apart from Watson's admission that he was inspired by The Wire's Lester Freamon in his aproach to investigating the story, which got a huge laugh.

After such an engaging session, I pitied whoever had to follow, but Scott Burnham succeeded effortlessly, with his talk around playfulness in urban design. He demonstrated how the notion of play and designing for serendipity can yield unexpected results, and that trusting the public to care for the things you build is imperative to this approach. Indeed, his most impressive work — a collaboration with Stefan Sagmeister involving 250,000 pennies — was actually removed by Amsterdam police, in under 24 hours, to stop it from being stolen! But as Burnham summed up, it's the story that remains.

Fiona Raby discussed the future-facing design project, aimed at addressing issues caused by the soaring world population (9 billion humans are expected to inhabit the planet by 2050). She discussed how foraging for food, and maximising the yields of the environment around us, could not only help with hunger, but also build social cohesion. However, the rather bizarre-looking appendages designed for such tasks felt unduly portentous, and contrary to the optimistic future Fiona's work targets.

Flipping things on their heads again was artist Ellie Harrison, who showed us the evidence of the obssessive self-quantification of her life – what she ate, where she travelled, etc. Photographs, spreadsheets, and so on were her tools, until she realised that she was merely the administrator in her own life. It's interesting to note that, despite her self-deprecating manner, and the plentiful laughs she got, how much people do this now, without even thinking. It's easy to self-quantify now – Foursquare, Scrobbling, Tweeting, Runkeeper, GetGlue – most people don't know why they actually do this, but are unlikely to stop.

From documenting one's life, to thinking of one's death. Game company Preloaded showed their remarkable game for Channel 4 Education – The End. Created to encourage young people to consider death, in a philosopical sense, it takes players through platform and strategy game mechanics (beautifully illustrated by Luke Pearson), and occasionally asking them questions like, 'Is there such thing as a cause worth dying for?' and 'Would you like to choose how you die?' 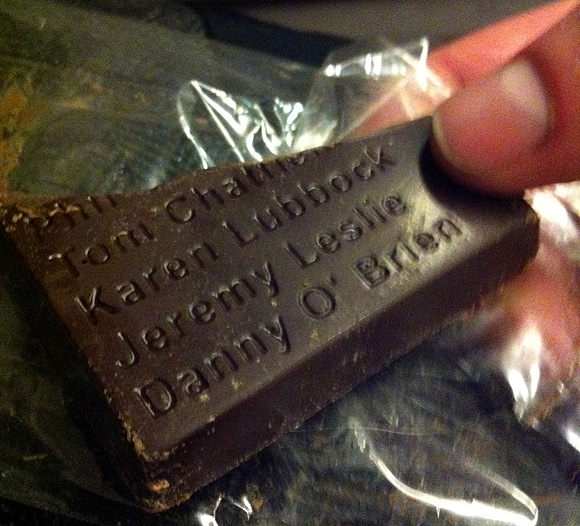 Next was a great interview of Karen Lubbock by MagCulture's Jeremy Leslie, about her magazine, simply called Karen. Intended as the antithesis of celebrity lifestyle magazines, Karen not so much celebrates every day life (as that sounds a bit lofty), so much as simply reflects it. Featuring articles as seemingly mundane as "Pat's bunions", it aims to document the little moments in normal people's lives, which would normally go unnoticed. This was one of my favourite talks – and promptly bought a copy of the magazine. What I love about it is its completely honest tone. There's none of the wry distance you get from, say, Martin Parr's photography. Humour comes from the people and lives it documents, rather than whether their jumper is unfashionable.

So, as energy levels and brain capacity were ebbing, and the sugar-rush of the chocolate programme was wearing off, the day was rounded out by long-standing online activist Danny O'Brien, whose unstoppable nervous energy perked the audience up instantly. Discussing the parallels between the billionaire tech tycoons, and homeless, squatting hackers, he points out the problems of having leaderless co-ops (such as the Occupy movement), and how a hacker space can ironically descend into anarchy, if you allow a Buddhist monk to set up shop there. The perfect end to the day.

It's tempting when attending a conference to look for themes or a common thread which links the speakers, whether serendipitous or by design on the part of the curator. This wasn't really necessary for The Story, as it became apparent that stories arise in all areas of life, whether you're looking for them or not. What did strike me was how the running order was perfect – keeping things fresh and varied throughout. Something I'm sure wasn't lost on Simon Thornton!